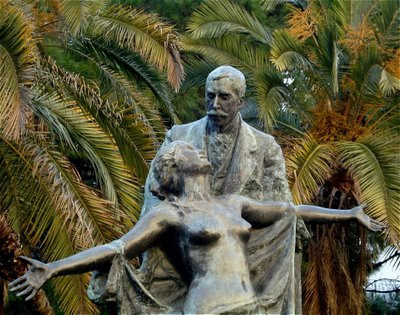 Eça de Queiroz (1845-1900) is considered to be the greatest portuguese writer in the realist style and one of the great figures of european 19th century fiction. His work been translated into about 20 languages.
This bronze statue, located at a little square in Lisbon downtown, is replacing the original one made of stone (1903) removed to the City Museum after beeing vandalized in the 50s. 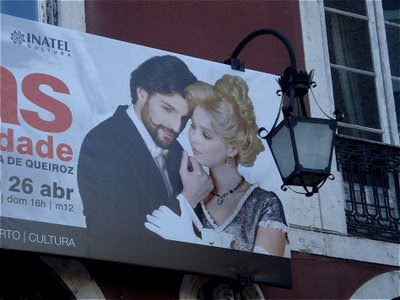 A new play based on this novel can currently be seen at Teatro da Trindade, one of Lisbon old theaters.
Posted by Unknown at 11.3.09

Wonderful post. I've never read anything by him, I shall now endeavour to right that obvious wrong.

Good information. I love the statue because it looks like a wonderful attitude regarding life and freedom. I wonder if it reflects the novel at all.

How lucky you are to have that book. Wonderful post, thanks for sharing.

Wonderful statue. I am glad they are trying to save the stone one. How neat to have an 1888 book. MB

Interesting post and photo's. Such a shame to have an important work of art vandalized. Hope it can be restored. The new statue is very fine though.

A very informative post. I must confess that growing up in the USA we did not get much exposure to Portugese literature.

Do you collect old books? My wife and I have a collection of old books, primarily travel books from the 1800's and early 1900's.

My oldest book is a 1791 edition of The French Revolution by Edmund Burke. My oldest travel book is an 1803 book on Travels through Silesia by John Quincy Adams, who was U.S. Ambassador to Prussia and later U.S. President.

I like to look at the old prints and early photos of places I have been, and the travel writing of a century ago was so much more colorful, and verbose.

Thank you for your kind coomments a couple of days ago about the crocodile photo on my site.

Clever title JM> I thought "Take me, I"m yours!" when I opened it! HA Lovely sculpture and interesting post. Nice that you have that old volume.
V

I've not read him, either...shame on me! Wonderful photos...I think the girl is duly impressed!

Such a great bronze statue!

i don't know this author(nobody is perfect ;) beautiful bronze , i love the palmtrees in the background too ;)

And I used to think that vandalism is a pretty modern invention...

beautiful statue... sad about the vandalism though - a universal curse!

What an interesting sculpture! I loved your caption too.

I love the exotic setting that the palms give to this sculpture. Lovely and interesting shot.

I read "El crimen de Padre Amaro"
I think by him?
Beautiful old edition.. My oldest one is a first print of The Great Gatsby!

The female statue looks so liberated and happy. Great composition in the book photo. They look to be in great shape too.